Enhanced with some S8 remix decks

Powerful Grooves with focus on Progressive House, enriched with some more Techhouse/Techno Style tracks, plus some beautiful Trance Tracks.

This is a  practical demonstration about using the Remix Decks with the Native Instruments Kontrol S8. This controller has been released about 6 months ago, and it helped to improve my DJ workflow tremendously, because it integrates so many useful functions in one device (e.g. you have 8 individual faders for controlling the remix slots).

Special thanks to Label “broque” for allowing me to use their music in this mix !

My mixes now released on Beatport

From now on, I will release my DJ mixes on Beatport. Advantage: you can stream them (as always), but also can download them in high quality. You find them here:

Hypnotic techhouse/progressive grooves and song transitions in first half.  Second half: Trance (mixture between older classics and newer tracks).

This time no S8 remix decks have been used.

Many beautiful tracks ! Deephouse/Techhouse lovers, check out the first half of the mix. Second half contains lots of great Trance tracks, among them one of the best vocal parts I ever heard.

This DJ mix is very powerful, especially in the first half of the mix. It benefits from two things: high quality of the songs, and massive usage of remix deck extensions. The remix parts deliver additional power to the individual songs. The flexbility is fantastic: a song uses some weak bass drum ? Just add a remix bass drum part. It is missing a bass line or some percussions? No problem, simply add some suitable parts.

It is so much fun mixing with these Native Instruments Kontrol S8 remix decks ! And improves the mixing quality tremendously.

Playlist (recommendations as always in bold)

Today I like to share some experience regarding the use of track download portals or applications for DJ’s, especially regarding the Beatport Pro Application for Mac OS X.

When I started with digital DJing in 2011, the Beatport website for me was a no-go: slow, bad organized, only 2 minutes track preview. For me, it was simply unusable regarding pre-listening a large amount of new tracks. At that time, djtunes.com offered full track preview functionality (not only fixed 2 minutes). And djtunes.com had a website which was well usable. Only disadvantage was that not all tracks were available there (contrary to Beatport). So I used djtunes.com as my main download portal for the following 2 years.

But in mid 2013, DJTunes changed their preview policy and now also allowed only 2 minutes per track. This was the reason why I left them. There is one other portal with full-length preview, trackitdown.net. However, this portal has very annoying flashy advertisements. Nevertheless, I stayed there for some time, because lack of alternatives.

Then in April 2014, Beatport made a tremendous step forward: it released the Beatport Pro Application for Mac OS X, which is clearly focused on professional DJ’s: very fast, easy to use regarding bulk listening of many tracks, individual filters, and remembers which songs have been listened already. I have been using this application since the first release and I do not need any other DJ portal anymore (also not the Beatport website, which still is not much better than years before). It saves so much time and has very nice functions for organizing searches and favorites, and linking elements. This helps me detecting beautiful songs, which I would not have found with any website.

The only annoying disadvantage is the high amount of track duplicates (because of different labels releasing the same songs), but that is a problem of Beatport itself, not of the Mac OS X application. I hope they will be offering a duplicates filter in the application in future, that would improve its value even more

=> strong recommendation for this great Beatport Pro application (if you have a Mac) !

Here is a screenshot, which gives some insight (the green circles indicate that you listened to these songs already. At the top, you see a list of individual filters. The song lists are easily browsable with keyboard shortcuts, and they react very fast): 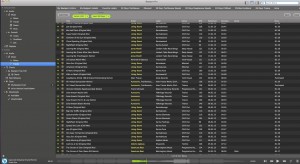 There are also functions for organizing the already downloaded tracks (playlists and so on), but I dont use that. I copy all downloads to my iTunes application and organize the playlists there. But this is stuff for another article…